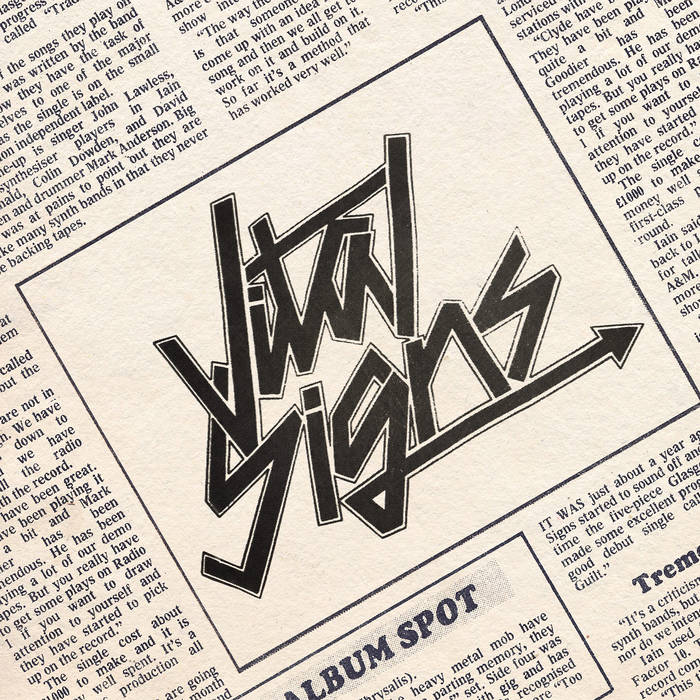 “Trading in Guilt” is one of those elusive, independently released new wave / minimal synth 7” records that have achieved cult status amongst collectors through the years. 2000 copies of it were originally pressed in 1983 and this apparently high amount of copies in existence of such a self-released record make us wonder why it is nearly impossible to find these days. Not even the band members have a copy of it! Were many of them maybe lost or destroyed? No clue, but whatever happened to them, if you do manage to locate a copy nowadays you can prepare your wallet. It was released in a standard white paper sleeve without artwork and the pressing itself was definitely not of the best quality. Just because of this we decided to bring it to you again, with great improvements over the original. This has been a hard task as no audio, band photos or graphic materials whatsoever have been kept by the band members, with the exception of the original, almost forgotten band logo that could be seen on Mark Anderson’s kick drum. Fortunately, the logo also made it onto some t-shirts back then and Colin Dowden kept one. He took the effort to redraw the logo and also spent countless hours trawling through microfiches of the Evening Standard newspaper at The Mitchell Library in Glasgow, all in order to locate an article from September 1983 that he remembered. This newspaper clip served as base to prepare our 7” sleeve.

We are extremely happy to bring you this highly sought after 7” now with a full artwork, on a much smoother, much better sounding vinyl. It is a limited, hand numbered edition split in two vinyl colours; 80 copies on translucent yellow and 120 on standard black, housed in a thin, very 80s feeling / looking paper sleeve including a download code.

In 1980 Iain MacDonald had the vision of starting an all-synth band. Being a keyboardist himself, he put an ad in a local paper for other keyboard players. Out of that he found Colin Dowden who turned up with his Moog and some very good ideas. Iain already knew Mark Anderson who was a good experimental drummer with add-on synth effects to his drum kit. Colin knew about singer John Lawless and clinically trainee piano player Dave Madden. The band worked together writing songs and doing local gigs. It didn’t take long for Vital Signs to start gaining a following and coming up with interesting tunes.

Due to his previous experience in music production Iain already knew that the best way to move ahead was to make demos and get them off to labels. As time went on they picked up various agents and managers, did gigs up and down the U.K. and got some play on local radio. Things really seemed to be kicking off for Vital Signs in 1983 when they released their “Trading in Guilt” b/w “Miracles” single on their own label and it was picked up by the legendary John Peel at BBC Radio One. But even despite the airplay and various labels paying for further recording, they didn’t manage to break through. They probably went as far as they could possibly go and when no major deal actually came to happen, the band decided to call it a day. Unfortunately, apart from “Trading in Guilt” and its b-side “Miracles”, no other Vital Signs recording has survived.

Transferred and remastered by Nicolás Zúñiga.
Artwork by David Lanna from an original Evening Times page (September 16th, 1983), provided by The Mitchell Library, Glasgow.
Big thanks to our friend Jörg Opitz.