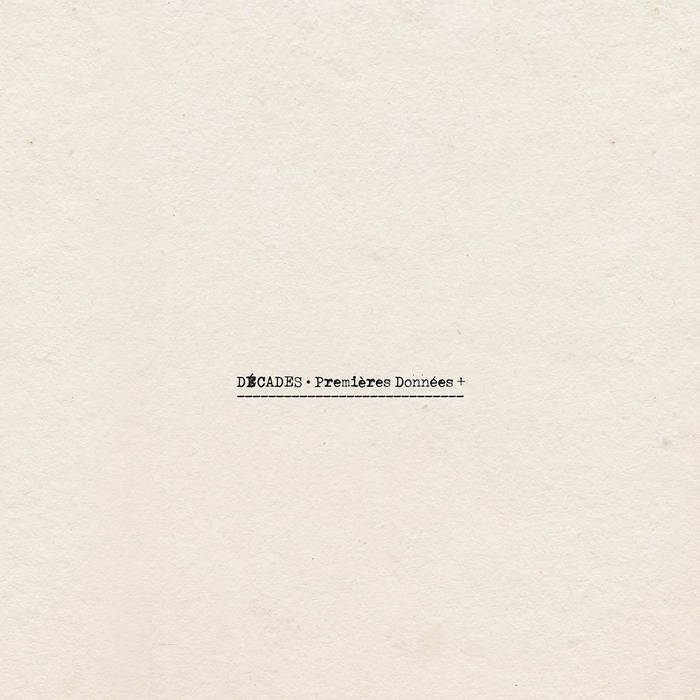 ‘Premières Données’ (meaning ‘first data’) was the 1987 cassette-only release by Décades, the by then solo project of Laurent Bergot from Rouen, France. Out of its original 7 tracks, 5 were studio recordings and 2 were self-recorded demos that Laurent did on his portastudio, added in extremis to fill up an, in his opinion, disappointing release that he expected to sound much different in the first place. As the studio recording and mixing was done in a restless way without room for corrections or enhancements, Laurent just got disheartened and depressed with the final result.
He had a very different idea of how he wanted everything to be, but in our humble opinion ‘Premières Données’ turned out to become one of the most important cornerstones of the original ‘cold wave’ genre and is a great album throughout. Laurent doesn’t understand our interest in Décades, but we want to show him that people actually love his music and that he should be very proud, releasing a big part of his repertoire on vinyl, a format on which not a single song by Décades has been ever released before. For starters, we have created ‘Premières Données +’ as an improved, roundup version of this fantastic album, including the previously 100% unheard 1987 studio version of the song ‘Le Jour Se Lève’ that Laurent left out of the cassette release in favour of his own, rougher demo version. We also included the intro that Laurent wanted to use back in the day, but was also left out for technical reasons.

We are extremely happy and thankful to Laurent for allowing us to bring you this cold wave masterpiece in the form of a limited, hand numbered LP edition split in two vinyl colours; 80 copies on clear and 120 on standard black, housed in a matt finish sleeve with double sided lyric insert and including a download code.

Mastered by Nicolás Zúñiga.
Artwork reworked by David Lanna from the original layout by Jean-Pierre Levaray.