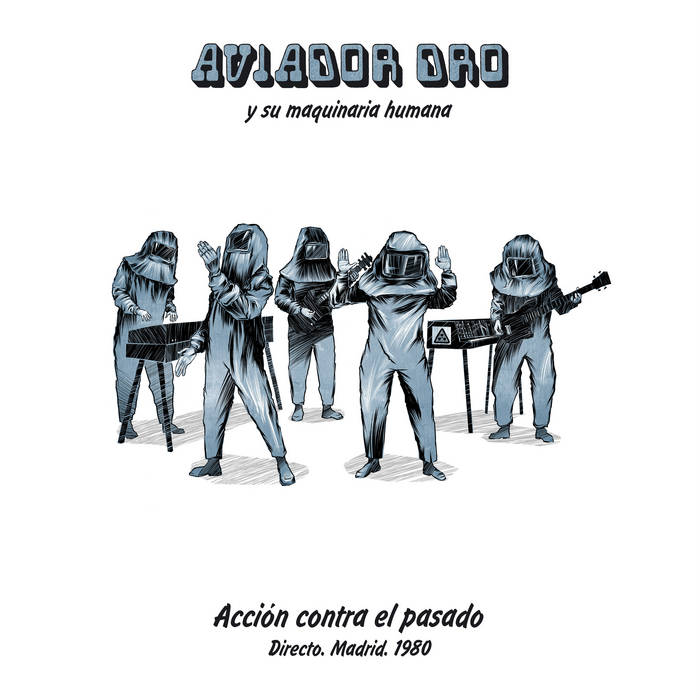 VINYL VERSION out November 25, 2019. We only have a few copies as this is a joint release with Mecanica so be quick: www.deadwaxrecords.es/releases.php

What can we say about Aviador Dro that hasn’t been told already. They were without a doubt true pioneers in the Spanish electronic music scene and remain being the most influential techno-pop band around these parts. Beginning activities in 1979, this year they are celebrating their 40th anniversary playing shows, re-releasing some old works, publishing a book and also a new album. We join this celebration together with our friends from Mecanica, releasing a very early, most interesting live recording.

"Acción Contra El Pasado” was registered live at the I.N.B. Rey Pastor in Madrid on December 13th, 1980. It is one of the oldest live performances of which recorded evidence exists and is legendary not only for its age, but also for including some very rare songs songs, early covers by Kraftwerk and Sex Pistols and primal renditions of soon-to-become classic tracks. This live concert was executed under the "Aviador Dro y su Maquinaria Humana" one-time moniker, band members being Biovac N, Fox Cicloide, Placa Tumbler, Derflex Tipo IARR, CTA 102, X, Metalina 2 and Cyberjet. A priceless piece of Aviador Dro history that was luckily recorded onto cassette directly from the mixing desk and much to our delight has been carefully kept by a friend of ours for nearly 40 years, making this release possible. Despite its age, it has been lovingly restored and mastered by our Nico DeadWax (Nicolás Zúñiga) with fantastic results, sounding much better than one could expect from such an old cassette recording.

We are so happy to bring you this joint release with Mecanica, a limited edition of 400 copies (150 on turquoise vinyl and 250 in standard black) with all-original artwork by the Polish artist Michał Arkusiński and including an A2 size poster. We at DWR only have a few copies so don’t be late if you want to purchase it from us, otherwise you’ll have to go to Mecanica!!